Hey everyone. I hope you're all well and finding gems of sports cards in your packs.
I was checking out my local online edition this evening, and came across an article about an old Mayo football card. I thought, "I gotta share this with my peeps."
Here is a link to the story.
Basically, a guy found an old football card in an old family photo album. I used to keep cards in photo albums when I was a kid. The card that held the honorary first page spot? 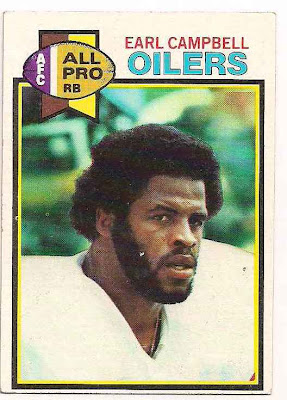 Surprised it was not a Lion? Well let me explain. When I was a kid, the Lions sucked. Bad. They didn't have a star. They were not on T.V. often. My kid brother was a Pittsburgh Steelers fan, and they were on T.V. a lot. Two games a year against the Oilers, and I became a huge Earl Campbell fan. His punishing style was a thrill to watch. Some day, some future family member of mine will find an old card album of mine. In the first 9-pocket page will be my holy grail. The 1979 Topps #390 Earl rookie card.
Posted by the sewingmachineguy at 9:32 PM