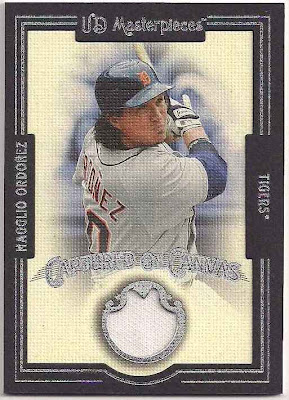 Happy New Year everyone. Thanks for coming to my little corner of the world.
With a new year here, I thought I would write a bit about spending on sports cards.
This 2007 UD Masterpieces Captured on Canvas Magglio Ordonez card is the last card I purchased in 2011. It was an eBay score. I got it for a total of $1.94 shipped. It came in a plain white envelope. A top-loader, in a plain white. Why does this matter? Why does this $2 buck card of former Tiger Magglio matter?
First, it's a Tiger, and I'm a Tiger collector. It's from a great set that I have been tinkering with. And it's a card I didn't have. For $2 bucks, the choice to snag it was easy. Too easy.
Second, it matters because it might be a waste of $2 bucks. "What?"
Allow me to explain...
I have been dropping a couple of bucks here, and a fiver there for about the last four years. The return to collecting years. In some instances, I have dropped a Jackson or a Grant on a card. But it's the little three-buck deals that are probably messing with my checking account balance. I have no clue what I spent on cards last year.
I am a wreck with money. The sewingmachinegal keeps the family books well balanced. I have a little spending money to fiddle with each month, and I probably don't use it wisely.
Chris from Stale Gum keeps a running total of his expenditures right on the face of his blog. That is ballsy. I am sub-consciously keeping myself in the dark about how much I spend on cards, because I like collecting (spending), and if I really take an honest personal inventory of my spending, I may not like what I see.
Did I really spend money on cards and neglect my Roth IRA? I have to think about that one...
Additionally, I have been wanting an Al Kaline rookie card for my whole life. I just spent about 1% of the card I really want on a Magglio that I will sleeve, and toss in the Tiger box. Maybe I will look at it again, but probably just in passing as I sift through a stack someday. I would most certainly look at a Kaline rookie card many many times. Heck, a Kaline rookie might even be sneaked onto the bookshelf in the living room for all to enjoy.
I am seriously considering adding a ticker to my blog. A sports card expenditure ticker. When I drop a twenty on a stupid blaster of 2010 Upper Deck baseball, the ticker shows it. When I sell cards on eBay, the ticker ticks down. Would it be possible for me to keep the ticker near zero? I have around 250,000 cards in the basement. Yes, there's a lot of worthless junk wax down there, but bundled together, it may bring in a bit of revenue.
Is it possible for me to collect and not spend? We will see in 2012.
Posted by the sewingmachineguy at 9:00 AM